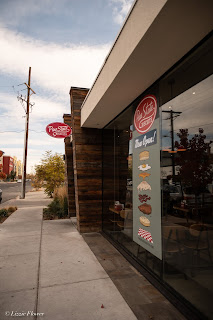 I've been known to post a Google Review or two and if the food comes out looking really good I'm more than happy to include a picture but every now and then a restaurant comes along that absolutely blows the doors off and exceeds all expectations.

A block off Virginia Street in Reno, Nevada; not quite downtown; not quite midtown; there is a restaurant called Pine State Biscuits.  It's in the middle of the block east of the intersection of Center and Pine Streets. It has a Center Street address but the door is on Pine Street.

First things first: How I learned that this restaurant was even in Reno. If you are lucky, you have a Ray and Vicky in your lives.  This couple has great taste if food, entertainment and friends and when I moved into my building and met them, I knew immediately that I wanted to spend more time with them.

The other day when we were going to a forum breakfast, Ray mentioned that they had gone to a biscuit restaurant. Being a paleo girl, I immediately cringed at the thought of a big heavy carb-laden white flour biscuit but then he told me that he'd had the shrimp and grits and for some reason, I'm not sure if it was the excitement in his description or the way he described it to us but the thought of it started to tickle the cajun/creole sensors in my brain.

The next day, my husband and I set off on foot to find the biscuit shop and much to our surprise, found it quite busy at 1:20 in the afternoon. A steady flow of customers ebbed and flowed in and out of the establishment. They ranged from older folks to millenials with children albeit that the children were running around untethered but that is a whole other blog.

We ordered at the counter and took a number. The place smelled delicious and the biscuit sandwiches that were being delivered from the kitchen were humongous and dripping with fabulous looking sauces to say the least. An example of a s'mores toaster desert was on the counter by the registers and it also looked delectable but being unable to workout at this time due to an injury, I knew I hadn't earned a treat like that.

As we waited we watched the staff working and delivering food. We noticed a nice note on the table noting...
Thanks for supporting small independent business by
bussing your own table 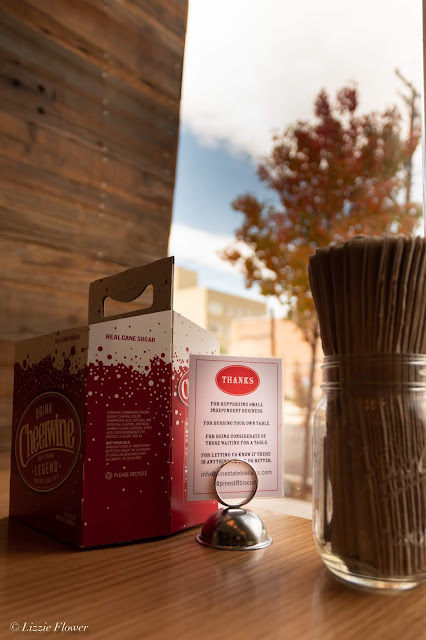 Simple instructions with a thank you card

After a pretty short wait, this was delivered to the table

Shrimp and grits southern style. The butter swirled on the plate and the bacon grease shimmered on the shrimp. My husband and I looked up at each other and simply smiled.

Every bite was delicious and we left there feeling quite satisfied.

We happily bussed our own table as they politely asked and headed down the street certain to return again.