I have been blessed by a constant parade of amazing human beings that have marched through my life. Whether they were one of the clowns or a member of the band, they have constantly entertained and taught me life's lessons.

Without a doubt, the Grand Marshall of the Lizzie Flower Parade would be Miss Della. Della is an angel who swooped into my life in 2006 at a time when I didn't even know who or what I was and taught me everything I never knew.

When I met Della, she was already hitting the twilight years of her life and I knew that I needed to enjoy her while I had her. She always had a sound bite for me no matter what the situation was. Her gift was that she kept life simple and it was in that simplicity that I finally found out that life isn't as complicated as I'd been making it.

Della was a tiny lady in her early 70's when I met her. Even though she was small and frail, she had a no bullshit attitude and was not afraid to tell you exactly what she was thinking. She smoked like a chimney which gave her a rough voice and even though she was small, she could produce substantial volume and when she spoke, people listened.

At the time I met her, I was in a futile relationship with a man that I liked sometimes, thought I might love, secretly hated and was pitifully co-dependent on. Taking things into my own hands, I quickly became engaged to him.

I would go to Della's and spend hours unloading all my confused and misdirected thoughts and feelings. One day after a long ranting that she patiently and lovingly sat through, she calmly put her cigarette to her mouth, took a long draw off of it, leaned in and as she exhaled the smoke she whispered to me, "Your picker's broke".

How could she say that? I was madly in love and engaged to the man of my dreams. Kinda.... not really.... Wait a minute...maybe she was right.

She went on to explain to me that I'd been settling for Cup o' Noodles my whole life and it was time I held out for the Tacos, Beans and Rice. 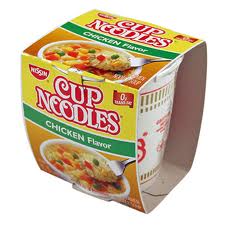 "When you're hungry, it's easy to grab some Cup o' Noodles. It takes care of your hunger quickly and you don't have to put a lot of effort into making it. The problem with Cup o' Noodles is that it doesn't satisfy you very well. After an extremely short amount of time, you're hungry again and reaching for another Cup o' Noodles. The cycle never ends and you will always be unsatisfied." 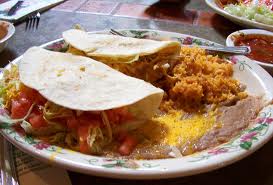 "If you prepare yourself for the full meal, the Tacos, Bean and Rice, you will be always be satisfied."

Could it really be that simple?

To the delight of my family, friends and of course, Della, I became UNengaged 5 long months after putting on that ring. It was a tumultuous 5 months and I was ready for it to end. Della asked me to take a year off from men. No dating, no flirting, no casual relationships and of course...no sex.  As ridiculous as it sounded I took her advise.

The year came and went and I started dating again. Without me knowing it, during that year I had found something that I'd been neglecting for years...myself. I knew me for the first time in my life and I even liked me which I'm fairly certain was a feeling I had never enjoyed.

I started to understand that if I liked me, wouldn't I want me to be in a healthy loving relationship?

I know women who have the Tacos, Beans and Rice and don't even realize it. They're just lucky enough to have it. I know women who are settling for Cup o' Noodles and can't figure out why they are so unsatisfied.

I can't say that I figured out in that year what I want or need in a man but what I did figure out was what I didn't want.

I don't want to fix anyone. I'm not responsible for anyone's happiness or discontent. If you're broken, go fix yourself.

I don't want to spend time with someone who doesn't have integrity, honesty and kindness and if I'm going to expect those virtues in them then I'd damn well better practice them in my own life.

I lost my Della to lung cancer in June of 2011. Rather than be sad for my loss, I embrace myself with gratitude. Every day I'm grateful that she loved me enough to share her wisdom with me.

I hope you all have a Della in your life and for God's sake, hold out for the Taco, Beans and Rice.
Posted by Anonymous at 7:11 PM No comments:

Anyone who knows me, knows that I am happiest when I'm on my bike. 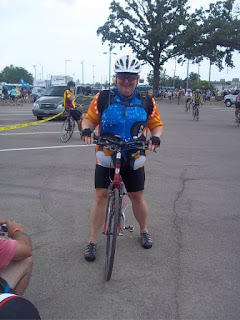 RAGBRAI was a 7 day, 471 mile ride across the great (and hilly) state of Iowa. I love to ride the challenging hills and miles but on most days, I'm looking for a relaxing meditative ride.

The other day I was on a short bike ride. I do a 15 mile loop around the south side of Lincoln that takes me through parks, by an outdoor mall, through residential backyards and over a major highway.  Along part of the route, there is a shallow concrete water slough that cuts through some backyards. Unless it's raining, the slough only has a couple of inches of water in it. It's a peaceful, slow babbling waterway where moss lines nearly its entire expanse.

As I was riding along this meandering bike trail, I heard something over my right shoulder. When I looked, there was a beautiful, green necked mallard duck slowly gliding beside me, over the waters of the slough. He looked over at me, made eye contact and then went back to his business of flying. I slowed down to watch him, envying his freedom of flight.

Slowly and silently he glided beside me which added to the serene meditative state that I was in, then the duck decided it was time. He lowered his landing gear and I knew in an instant that he was not prepared for what was about to happen.

When the ducks feet hit the water, you could tell he was expecting to land in a amount sufficient enough to give him a soft and safe landing but because of the shallow condition of the slough, what happened instead was that his feet made contact with the mossy concrete causing him to flip beak over butt through the water.

I, of course, hit my brakes. I don't know what I thought my qualifications were to help.  I don't know if there is a thing called duck CPR but I was prepared to try.  When he finally stopped rolling through the mossy water, he shook his feathers and composed himself. Again our eyes met.  Obviously embarrased, he turned his back to me, settled into the water, pretending that he was floating there the whole time.

I started riding my bike again but the farther I got, the more tickled I got. I kept picturing the ducks eyes as he landed and flipped. I had 6 more miles to ride before I was home and everyone I met must have thought I was bat shit crazy with that silly smile on my face.

It's true, I'm the type of person who laughs when someone runs into a glass patio door that they think is open. I watch Funniest Home Videos and can hardly stop laughing at some of them. There is one video of cat that was stuck to a clothes basket that caused me to laugh so hard it required a change of clothing. Yep, it was that funny and even thinking of it now makes me giggle.

So what's the moral of this story? There isn't one, if you're looking for a moral, you're reading the wrong blog. But if there was a moral to this story I suppose it would be this, "Sometimes you just have to shake off your feathers and say, 'I meant to do that'"