Where I Get My Faith From

Well, another RAGBRAI is looming on the horizon. This will be my fourth in a row and I doubt if I'll ever get sick of the ride, the people and the atmosphere. I will be riding with Team Pez for the third year in a row and they are an amazing group of individuals. This is year 15 for the team so I wouldn't miss it for the world. I love them all. 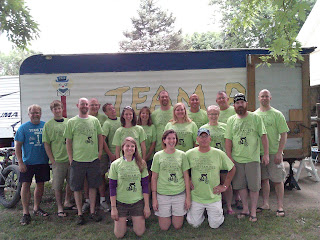 This is the crew that started last year and although we have some people who join us for a day or two or leave early, there is a core group that does the whole week which ended up being 7 days of riding and over 450 miles if you do the extra Karras Loop.

In  2012, while training for RAGBRAI, I met Pat, a member of Team Pez. I could tell by the size of his quads (thighs), that he was probably a cyclist and then when we started chatting, I found out that he rides RAGBRAI every year. I told him how I was planning to ride it with my brother's family that year and how nervous and excited I was. I explained to him that I was not certain that I could take on the ride because I was at a place in my riding where my legs would cramp if I rode more than 30 miles and most of the days were 70-80 miles. I had very little confidence in myself and my ability to ride a bike across the state of Iowa.

Over the next several weeks, Pat gave me encouraging words that reassured me that the ride was something I could do. When I would talk negative, he would roll his eyes, make a "psss" sound and fling his hand at me with a brush it off kind of attitude and then he would tell me a story about people he had seen complete the ride, how fun it was and he would make me feel like the ride was attainable.

By the time the actual ride came, I was so nervous I could not even sleep. Pat had given me his team information and I had given him mine (we weren't riding for the same team at that time). The evening before the ride started, Pat showed up at our camp site and again gave me words of encouragement and let me know that he was there for me and then he asked me if he could ride with me at some point in time. I knew I couldn't keep up with him but I agreed to try.

When morning arrived, I departed with my brother's family and we decided to stop at Farm Boys, home of the famous breakfast burrito. If you decide to ride, veterans will advise you to have one of these burritos. We were less than 15 miles into the ride when we decided to stop and we had the good fortune to run into Pat and members of Team Pez there. 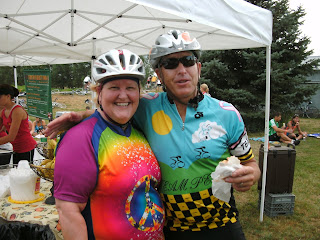 Here is a picture we took on that day. Now, bear in mind, I'd already lost 70 or 80 lbs. when this picture was taken. I always refer to this picture when I'm not sure whether or not I should have gotten my arms reduced. It looks like I'm packing around a plastic bag full of creamed corn in each sleeve.

Pat asked me to ride with him so I reluctantly let my family ride on and Pat rode with me. He mostly rode ahead of me, constantly keeping an eye on me and chatting and laughing with other riders.

He chatted with me too about all the things I'd need to do over the next 7 days and all the food vendors and activities I shouldn't miss. Every day of RAGBRAI, the Iowa Conservation people have a place where you can stop, get some cold water and a free banana. Pat talked me into stopping with him and we shared a water and banana. As we sat on the side of that hill, surrounded by cyclists, I confessed my lack of confidence to him without explanation and he talked to me about cycling and human relationships in general. The man has a million funny stories. All the time he was talking I felt a little guilty because I had a little secret. I had lost a lot of weight by that time but I had a long way to go. I felt like he couldn't possibly understand the journey I was on and I was ashamed to have to admit I didn't believe in myself.

I was never proud to say I'd lost 80 lbs when it was so obvious I had a long ways to go so I always kept silent. It was a secret I was too proud to tell. After mustering up some courage, I brought out this picture which is my official before photo. Yuck... 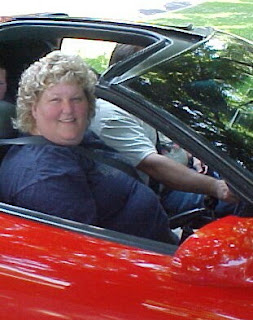 Pat, being a smooth easy going cowboy type, didn't flinch. He just scanned the photo, told me he admired what I'd done and continued talking about the different people he has seen cycle across the state. He talked about people with no legs or arms, people who were older or heavier than I was at the time who had done this ride. I listened with all my attention and wondered how this man, a near stranger could have more faith in me than I had in myself.

Since that day, I'm more open about the changes I have made in my life and I've learned to be proud of the journey I've taken instead of wallowing in the shame of my past mistakes, primarily my relationship with food.

The picture on the right was taken in April 2015. 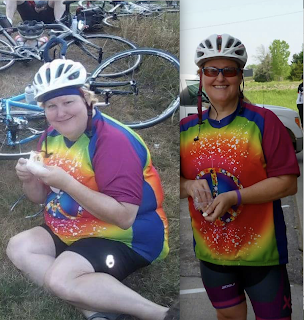 Nearly three years later and I look a little different...like 70 pounds lighter and that jersey is certainly less clingy.

Even after all this time, all these miles, all these pounds, I feel like Pat is still the source of my faith in myself. He still encourages me when I'm uncertain and he still makes me feel like I can do just about anything I set my mind to and that I deserve to enjoy the results of my efforts.

I don't know if you have a Pat in your life but if you don't, I suggest you go out and find one. Listen to him and until you have faith in yourself, let his faith in you give you strength.

I am forever grateful.

"It's not pain, it's progress"