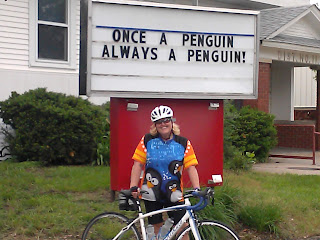 ﻿
Here I am, getting ready for the biggest bicycle ride in the country.  People come from all over to ride their bikes across the great state of Iowa and I am one of them. RAGBRAI (an acronym for Register's Annual Great Bike Ride Across Iowa) is an event where approximately 20,000 insane (and fabulous) individuals ride their bikes in 100 degree heat for 400-500 miles over the course of 7 days. I can not think of any better way to spend your vacation time.

We will start in Council Bluffs, ride thru Harlan, Perry, down to Des Moines, Knoxville, Oskaloosa, Fairfield and finally end up in Fort Madison. As you can see by this map, it looks like they hired a drunken sailor to plot the course for this route. 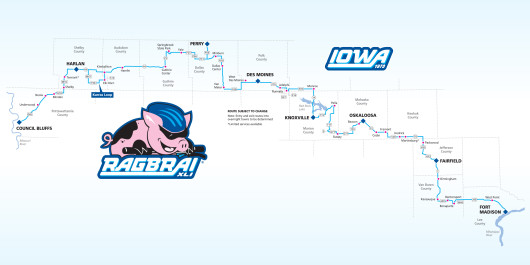 I only have to drive an hour to the start point since it's in Council Bluffs this year. I admire the individuals who fly in, ship their bikes or rent bikes when they are here.  I feel very fortunate to live so close to such an amazing event and to have the health and lifestyle that affords me the opportunity to participate.

I've been anxious and excited for several months but for the last week, the only two words that could describe me are "hot mess". I have been busy making lists, getting everything ready and packing unpacking and repacking. I have been excited but being anxious and excited feel very similar so I don't really know which emotion is torturing me at any given moment. At the moment, I choose to call it excitement. I'm certain my family and friends are painfully sick of hearing about this ride. You would think nothing else existed.

I am riding with Team Pez for the first 4 days of the event this year. My Lincoln friend Pat has been a part of the team for years and has graciously invited us to ride with them. It will be my first time riding with this team so I will have an opportunity to make some new friends.  My brother Keith and sister-in-law Teresa are coming too and since we would normally take an air-conditioned camper trailer with us and Team Pez camps in tents as they go, we will be facing some new challenges. One of the benefits of Team Pez is that they stay at "Host Homes" which is to say that someone graciously lets us set up tents in their yards, use their water, showers, and facilities. It's kind of a spoiled version of primitive camping.

After the first four days, Keith, Teresa and I will be leaving Team Pez and joining Team Hardy Farty which consists of us, by brother's two children (Kaley and Cody) their son-in-law (Patrick). In case you are wondering, the name "Hardy Farty" comes from my maiden name which is "Hardy" and when we were little, we were called, "Hardy Farty". My brother named the team, not me. (exaggerated eye roll) I've made up a team motto that hasn't caught on yet.  I want to have Team Hardy Farty jersey's made which say Pull My Finger down both sides. I think it would be hilarious.

When we leave Team Pez, RAGBRAI will SAG (Support and Gear) Team Hardy Farty those last three days which means that;
a) we are limited to how much gear we can take, our bag (including tent) can only weigh 50lbs
b) we will be sharing bathroom, shower and water facilities with thousands of other riders
c) we will be sleeping in a sea of sweaty stinky bikers at a tent city
I have omitted items d) thru x) in hopes that you will continue reading. You are welcome.
Lets just say that it will be a whole new experience and that is exactly what we are after.

I'm sad to say that my sister-in law is leaving for a couple of days in the middle of this week to work but I must also admit that I'm excited that it will open an opportunity for it to be just me and my brother. I look forward to some one on one time with him. He is the best!  She will be joining back up with us in Knoxville when we join Team Hardy Farty.

RAGBRAI is about 2 things for me.
Riding Bikes
and
Food
When you are burning several thousand calories on your bicycle, you can absolutely pig out during the week. GUILT FREE!!!

Someone asked me, "How much weight did you lose when you rode your bike across Iowa?"  I had to admit, I gained 3 pounds which in my book is a successful vacation!!!

There are some amazing things to look forward to during the ride and they mostly involved breakfast burrito's, turkey legs, pork chops on a stick, smoothies and rhubarb pies made by loving Iowa church women. God bless them all.

I can not even fathom the number of bottles of water, Gatorade and bananas that are being shipped into Iowa this week.  I think it would blow your mind!

Tonight, I will finish packing. For anyone interested, here is my list and it all fit into a 50L Kelty Backpack that weighs less than 50lbs.

And last but not least...
Butt Butter for the Chaffing I hope to not get


Posted by Anonymous at 3:48 PM No comments: