Fort Churchill - Every Photo Has a Story Behind It 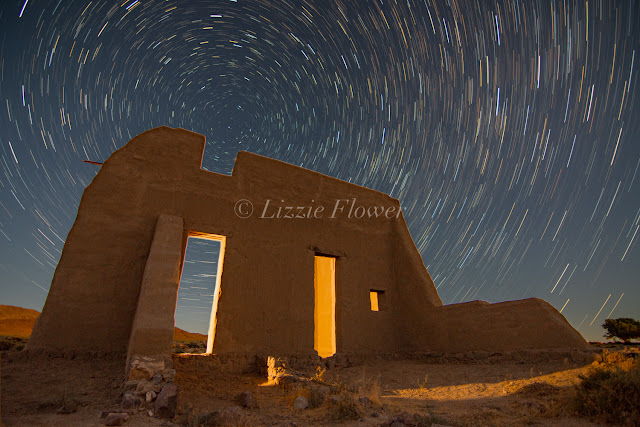 Every photo has a story behind it and this one is a doozy.

When I told a friend that I wanted to do some astrophotography at the Fort Churchill ruins they told me, "Be careful, that place is haunted."

I don't believe in haunted places but I can tell you that after what happened to us I have to wonder if the place is cursed.

One night I was acting particularly bored and my husband asked me what I wanted to do. I told him I wanted to go to Fort Churchill and shoot star trails.

This wouldn't be such a big deal but it was nearly 8:00 pm, the sun was going to be setting in an hour and we live over 30 miles away from the Fort Churchill Historical Park.

The fact is that there is a short period of time once a month where the skies are dark and the moon is gone so you can get dark sky photos of the Milky Way and I was tired of waiting. When the moon is out, you can turn the camera towards the North Star and get some impressive star trails. In fact, this is when I prefer star trails because the colors of the stars are deeper and the illumination on the subject is better.

My intention was to take a few foreground shots with some light painting, set up the intervalometer and sleep in the car for a couple of hours while the camera took a huge batch of photos. When I woke up I was going to fetch the camera and go home to finish sleeping and then process the shot later but as with most well laid plans, the ghosts of Fort Churchill and the mosquitos of the high desert had more nefarious plans.

By the time we arrived at the park the sun had already dropped below the horizon so I set out to frame my shot and get the foreground subject shots taken before I lost all the light.

This is usually a relaxing and wonderful time when you sit and watch the moon rise, the sun set and enjoy the desert evening while you wait for the sky to be dark enough to just click the shutter on your camera.

Everything went well for a very small amount of time when we began to hear the humming of the million or more mosquitos that had found their way to us. It was absolutely miserable and if you are someone who knows me, you can bet I wasn't wearing more than shorts and a t-shirt since I even wear shorts during the winter and this was mid-June.  The mosquitos were having a heyday!

For nearly an hour those mosquitoes feasted on us and I was so irritated and exhausted of swatting them away that I decided we had the subject shots we needed (mostly I was just tired of the mosquitos) so I sat up the intervalometer and we ran to the car.

My plan was to saturate the sky with an entire loop of star trails which takes hundreds of photos. I normally set the intervalometer for the shutter to stay open 30 seconds every one second so basically you are taking two long exposure shots a minute.

This meant 120 shots an hour and I was hoping to get nearly 400 shots.

I had brought a blow up mattress, blanket and earplugs and my husband planned to sit up in the front seat and sleep there.

About two minutes into our respite we heard a rumble in the distance and soon we were bombarded with the sound of helicopter blades and the bright flashes of a search light.

I had two major concerns:

1.  The light the helicopter was flashing their light on my subject and blowing my shots
2.  The dust it was throwing up was going to cover my camera and exposed lens to dust

We gritted our teeth and sat waiting to see just how long the helicopter was planning to stay.

During the first half hour of watching the helicopter fly in a grid pattern over the entire area we talked about what they might be looking for.  Could it be a lost hiker, lost kayaker? After all, there was a river at the bottom of the park. My husband thought they might be doing drills.

We started to make up stories of an escaped prisoner and how unsafe we might be if the desperado decided to force us out of our vehicle and leave us stranded in the desert.

I have to admit that the prisoner fantasy was mine, not my husbands. He was pretty sure we were safe from escaped criminals.

After another long period of lights and noise my husband turned to me and asked, "So, what do you want to do Flower?"

I shrugged my shoulders and said what the heck, "Lets just wait it out and see what we get."

I finally fell asleep and eventually, who knows when, the helicopter left.

My alarm went off three hours later and I woke up to retrieve the camera.

With all the gear loaded and my husband driving us out of the park I couldn't help but take a peek at the photos to see how many had been effected by the lights and dust. If I could see light interference on the image I would be able to estimate what time the helicopter left.

To my utter shock and despair I found that the intervalometer had failed and rather than being rewarded with the 100's of shots I was expecting, I found that the camera only took 40 shots.  That means that it failed in the first 20 minutes.

After returning home, taking a nap and starting processing I was incredibly happy with the results of this image.

I'm actually glad I didn't get all the shots because I would not have ended up with this composition and I certainly wouldn't have reduced my photo count to 40 if I had hundreds available.

What a happy circumstance!!!

In case you want to know my camera settings:

The subject (the building) was a stack of two photos
ISO 400
F/2.8
96 Second Shutter
In only one of the two photos I did light painting from behind the building.